SEE A SLIMMER YOU


1. Make your purchase below.
2. Receive your automated confirmation email upon purchase.
3. Follow the instruction in the email to reserve your prepaid appointment at your location of choice.

ONLINE SPECIAL
Buy Now and Get an Extra 10% OFF!
Use code "EXTRA10" at Checkout

* Valid for ONLINE PURCHASES only. Must use code.

The CoolSculpting procedure is the only FDA-cleared, non-surgical fat reduction treatment that uses controlled cooling to eliminate stubborn fat that resists all efforts through diet and exercise. The results are proven, and noticeable, so you'll look great from every angle.

Ask About Our Financing Options During Your Consultation 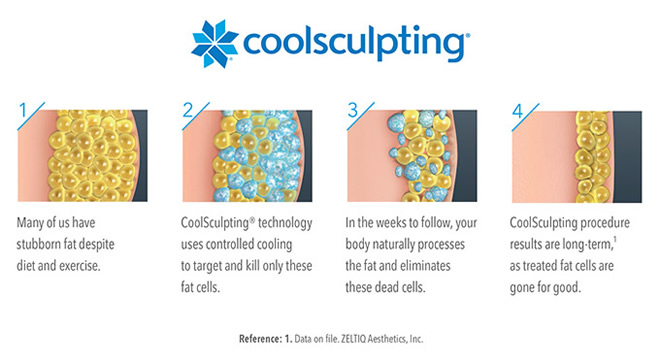 HOW DOES COOLSCULPTING FAT REDUCTION WORK?
The CoolSculpting procedure is the only FDA-cleared, non-surgical fat reduction treatment that uses controlled cooling to eliminate stubborn fat that resists all efforts through diet and exercise. The results are proven, and noticeable, so you'll look great from every angle.


*Results can vary based on individual conditions

WHAT HAPPENS DURING THE COOLSCULPTING PROCEDURE?
During a Coolsculpting session, your doctor will position the device on the target area of fat. The device will then draw the bulge up between two cooling panels. At this stage, you can expect to feel a firm pull and pressure sensation. Enough of a pull to ensure the target tissue will be cooled most efficiently. As the cooling begins to intensify, you can expect to feel a more pressured and intense cold sensation. But it shouldn't be too painful. Some patients even read, work on their laptops, or even take a nap during their CoolSculpting session. And up to an hour later, you are done and can go back to your daily routine.
ARE THERE ANY SIDE EFFECTS TO COOLSCULPTING?
Depending on your sensitivity level, you can expect to feel a variety of sensations during the procedure. Sensations such as pulling, tugging, mild pinching, intense cold, tingling, stinging, aching, and even cramping at the treatment site. But all of these should be mild and quickly subside as the area becomes numb.

Following the procedure, the most common side effects can include redness, swelling, blanching, bruising, firmness, tingling, stinging, tenderness, cramping, aching, itching, skin sensitivity, and numbness. Most side effects tend to fade within the first week, but numbness can persist for up to several weeks.

Additional side effects are very rare but can occur, especially if you have predisposed conditions. Let your doctor know if there should be any concerns regarding paradoxical hyperplasia, late-onset pain, freeze burn, vasovagal symptoms, subcutaneous induration, hyperpigmentation, or hernia.
WHEN DO I GET TO SEE THE RESULTS?
Following your CoolSculpting treatment, you may start to see changes as quickly as three weeks. Although, the most dramatic results are usually seen after two months. The great thing about CoolSculpting is that your body will still flush out fat cells and continue doing so for up to four to six months after treatment.

Keep in mind that with a CoolSculpting treatment, the affected fat cells will be eliminated. So as long as you maintain your weight with a normal diet and exercise, your results will be long-lasting.
WILL COOLSCULPTING WORK IF I AM HEAVILY OVERWEIGHT OR OBESE?
As an overall rule CoolSculpting is not recommended for those who are overweight by more than 30 pounds above their ideal weight. The best candidates for CoolSculpting are those who have undergone a weight management course and reached a weight within that 30-pound threshold and would like to sculpt their body or speed up further weight loss. As with any other treatment, CoolSculpting should always be combined with a healthy diet and lifestyle to maintain results. 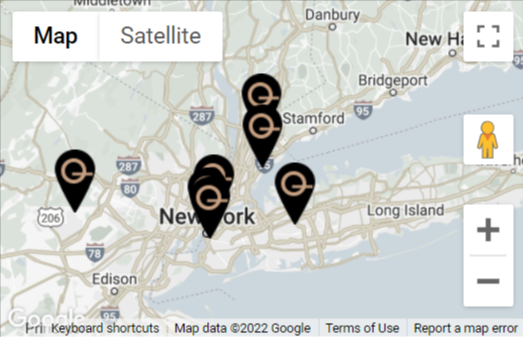 White Plains Home > Coolsculpting >
Save up to 70% off
Laser Hair Removal.
Book Now!